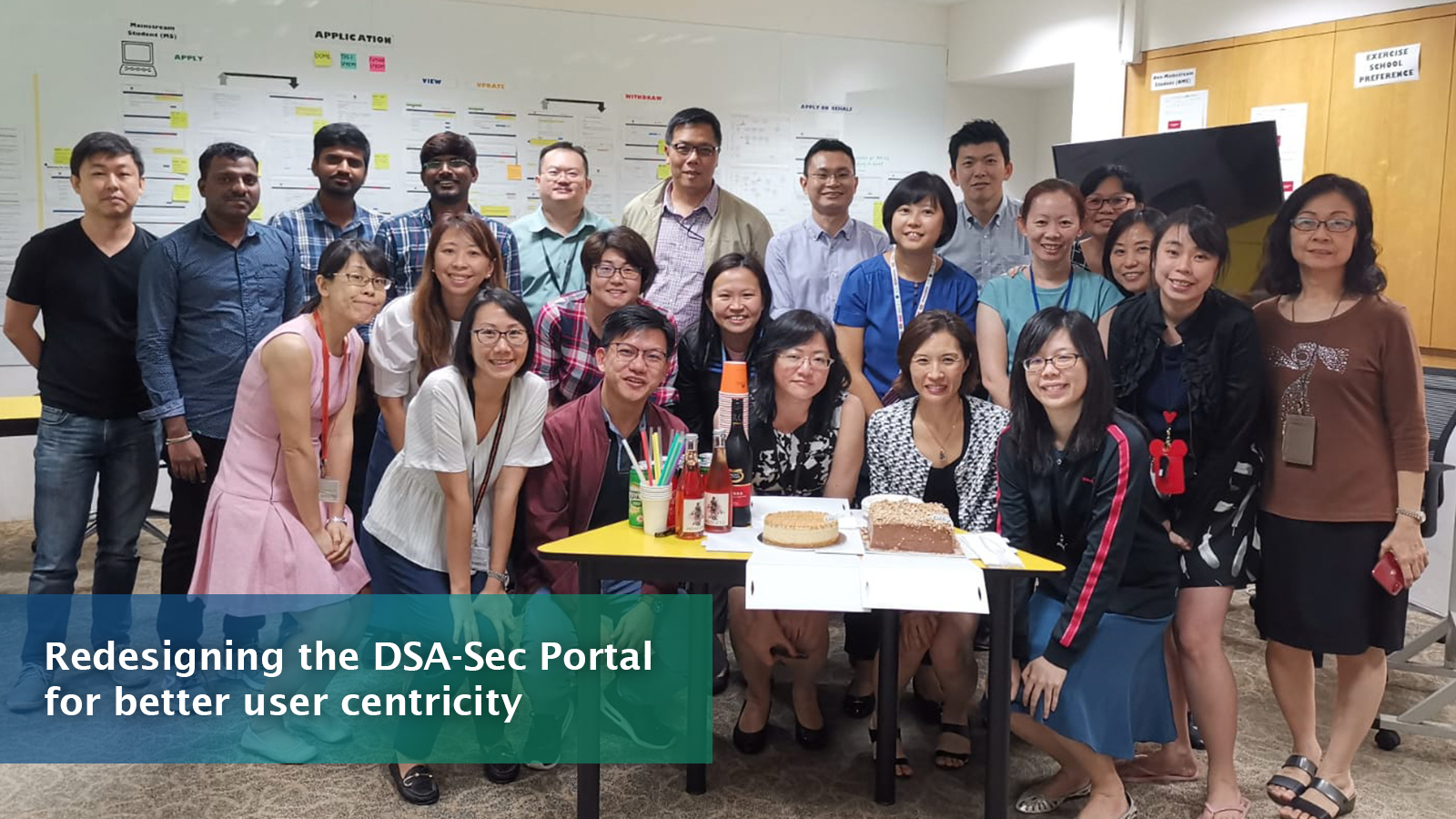 Congratulations – your child has just graduated from primary school! Your little one excels in swimming and dance, and you want to find a school that can help your child nurture these talents. You want to enrol your child through the Direct School Admission for Secondary Schools (DSA-Sec) programme, which enables her to be given direct entry to the school, and into a programme where she can develop these skills.

You begin filling out the application for your child’s first school of choice, and make copies of all the necessary supporting documents – only to realise that you will need to repeat this process all over again two more times, for the other two schools she is interested in. With the original DSA-Sec application process, chances are that your experience was riddled with bouts of frustration and confusion.

In 2016, Ryan Zhuang and Agnes Ong, GovTech’s applications consultants at the Ministry of Education’s Information Technology Division (MOE ITD), came together to figure out how they could streamline the DSA-Sec application process. Back then, submitting a DSA-Sec application was often a lengthy and repetitive process. Parents would have to submit applications individually, one for each school that their children were interested in. On top of that, parents would also have to submit copies of academic results, certificates, transcripts, or testimonials, with one set of these documents required for each application. Multiply this by three applications, and parents had a mountain of paperwork to sort through.

“It was a tedious and time-consuming process, as different schools required parents to fill and submit multiple forms with different details,” recalled Agnes. “Additionally, not all DSA schools accepted online submissions. This meant that parents had to personally make a visit to these schools to submit their application forms.”

This time-consuming process affected not only parents, but school staff as well. Primary schools had to compile reams of documents for students going through DSA-Sec applications, while secondary school staff had to sieve through applications manually.

The GovTech team at MOE envisioned having a one-stop portal for DSA-Sec applications which, as Agnes puts it, would bring about “greater convenience to both the public and school users”.

Before they could embark on creating this portal, the team had to first discover how they could ease pain points along the user experience journey. To do this, the GovTech team at MOE dived into research sessions with their various end users. These stakeholders included:

User behaviour greatly influenced the team’s redesign of the DSA-Sec process. “Our research findings enabled us to prioritise the features that would go into the portal. We designed and developed the DSA-Sec Portal with users in mind, and went about building the portal in a way that would best meet their needs,” said Ryan. One such example was the decision to develop a portal instead of an app.

“The DSA application is a one-off exercise for the public user. An app will require the public to first download the app before they can use it, which might serve as a barrier for parents. On the other hand, having a portal (instead of an app) would provide greater convenience for parents. A portal can be designed to be mobile responsive – where the screen layout will adjust accordingly to the user’s phone screen settings – thus providing a seamless experience for our users,” said Ryan.

The GovTech team’s research also revealed that parents typically hunt for DSA application-related information from various sources. With this behavioural insight, the team decided to centralise useful information that parents may need on the DSA-Sec Portal. “The pre-login landing page on the DSA-Sec Portal provides important information required by parents, such as a step-by-step guide on the application process,” said Agnes.

To devise this new portal, the team adopted agile methodology to shape the new platform quickly, while collaborating closely with MOE users throughout the entire development process. “Adopting the agile route helped us to shorten the procurement process, allowing us to deliver the project on a much faster timeline,” said Agnes.

“Going agile also allowed us to re-prioritise and swap the product development features in response to changing needs of policy, business and operating climates,” added Ryan.

The new and improved DSA-Sec Portal

With the end user experience in mind at all stages of development, the brand new DSA-Sec Portal was swiftly launched in May 2019. Parents can submit DSA-Sec applications for their children from the centralised online platform, and can apply for multiple schools with just one form.

Leveraging the Singapore Government Tech Stack (such as SingPass and MyInfo) not only made development a whole lot easier for the team, but also brought about “greater convenience for public users”, said Ryan. With the integration of SingPass, end users can benefit from a smoother, simpler login process.

“Parents no longer need to enter so much information as well, unlike in the past,” Agnes added. Forms are already pre-filled, thanks to MyInfo, making the entire process even easier for parents. As the portal is integrated with MOE systems, all required certificates, transcripts, or documents are also automatically transferred between primary and secondary schools during application.

In addition, applications are free-of-charge. This removes any potential financial barriers, and encourages students with talent and potential to pursue their interests regardless of their background.

It’s not just parents who reap the benefits of this shiny new portal; schools and MOE staff also get a boost in productivity and efficiency. Having auto-filled forms translates to reduced manual work for school staff, while the folks at MOE’s headquarters get a precise overview of DSA-Sec applications that is continually updated in real-time.

All these changes make for an entirely paperless user journey, and a hassle-free experience for all users. As a parent quipped on an online forum, “The [DSA-Sec] Portal is so much easier compared to the old process. Now, I can easily do it online from the comfort of my home, [instead of] running around schools to submit applications with documents for my son.”

The portal may be complete, but the team’s work is far from over. Users can expect continuous improvement on the portal. “The DSA-Sec Portal will be refined further for the 2020 DSA-Sec exercise, based on feedback collected from public, school and MOE users,” said Ryan. For now, the team is pleased with the fruits of their labour. The first batch of online applications were successfully submitted via the centralised DSA-Sec Portal in June this year.

“It was so heart-warming to see more than 10,000 parents from the 2019 P6 Cohort enjoying the convenience provided by the DSA-Sec Portal,” remarked Agnes. “When we finally completed this portal, all of us had a great sense of satisfaction. It was a challenging but ultimately fulfilling journey for the team, but we achieved our goal to create a centralised portal for all DSA-Sec applications.”